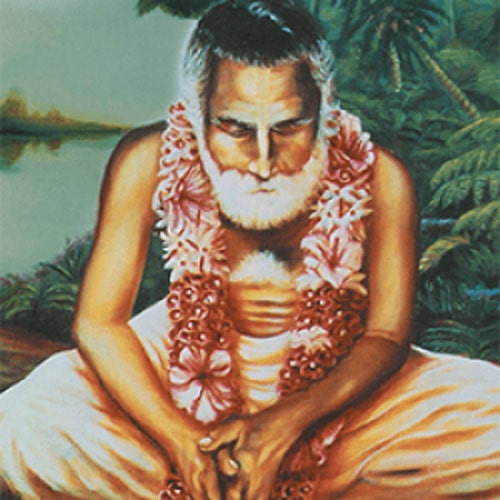 TRANSLATION
I offer my respectful obeisances to Srila Jagannatha Dasa Babaji, who is respected by the entire Vaisnava community and who discovered the place where Lord Chaitanya appeared.

In 1897 Gaura-kisora dasa Babaji came to Mayapur Navadwipa Dhama from Sri Vrndavana Dhama, where he was given the exalted title “Bhajananandi”. Seeing the transcendental behavior of Gaurakisora Dasa Babaji, Srila Bhaktivinoda Thakur used him as an example of nirapeksa (indifference), the symptom of an advanced renunciate.

Gaura-kisora dasa Babaji lived a life of humility and poverty, true attributes of a Vaisnava. He never accepted material goods from anyone, wearing discarded loincloths from corpses left on the bank of the Ganges. He begged for rice, soaking it in river water, and adding only salt and chilies. Accepting no favors, he remained fully detached from all possessions.

Born in a Vaisya family in the village of Bagjana near Tepakhola, on the bank of the Padma, Gaura-kisora das Babaji was known as Vansidasa while he was a householder. After his wife departed, Gaurakisora left his home for Vrndavana, where he was initiated into Vairagi Vesha (Babaji) by Bhagavata Dasa Babaji, one of the foremost disciples of Jagannatha Dasa Babaji.

Srila Gaura-kisora lived for some thirty years in Vrindavana, serving the deities and offering his prostrated obeisances to all the living entities of Vraja, whom he considered to be embodiments of Sri Krsna. He eventually left Vrindavana for Navadvipa.

At Navadvipa, Gaura-Kisora das Babaji entered moods of deep spiritual ecstasy, sometimes dancing on the bank of the Ganges chanting, “Gaura, Gaura”. At times he lies unconscious on the ground, or traveled through the sacred groves chanting Japa on beads, or sometimes on a knotted cloth. Occasionally he traveled to Godruma Dvipa to hear Srila Bhaktivinoda Thakura recite ”Srimad Bhagavatam”.

Srila Gaura-kisora das Babaji met often with Srila Bhaktivinoda, sometimes staying at his house to hear and discuss the philosophy. While he did not read or write, he was understood to be a vastly learned and self-realized personality.

In 1898, Srila Bhaktisiddhanta Sarasvati first met Gaura-kisora das Babaji, who was destined to become his spiritual master. At their first meeting, the Babaji was wearing a tiger skin hat and carrying a basket with puja paraphernalia. He offered Siddhanta Sarasvati several pieces of rope for chanting his rounds, and a tilak stamp with Hare Krsna carved on it. Srila Bhaktivinoda instructed his son, “You must take initiation from Babaji Maharaja, and don’t return to this house if you don’t.”

Srila Bhaktisiddhanta Saraswati implored Gaura-Kisora das Babaji on several occasions to give him initiation, but he was always refused. On one occasion, Srila Bhaktisiddhanta threatened to throw himself off the bridge and end his life if Gaura-Kisora would not accept him. Finally, in 1900, the Gaura-kisora das Babaji gave him initiation, and the name Varsabhanavi-Devi-Dayita Dasa. He gave Bhaktisiddhanta his tiger skin hat and the puja basket Gaura Kisora had received from his own spiritual master, Bhagavat dasa Babaji, which he had received from Jagannatha dasa Babaji. Gaura Kisora dasa Babaji left this world on November 17, 1915.