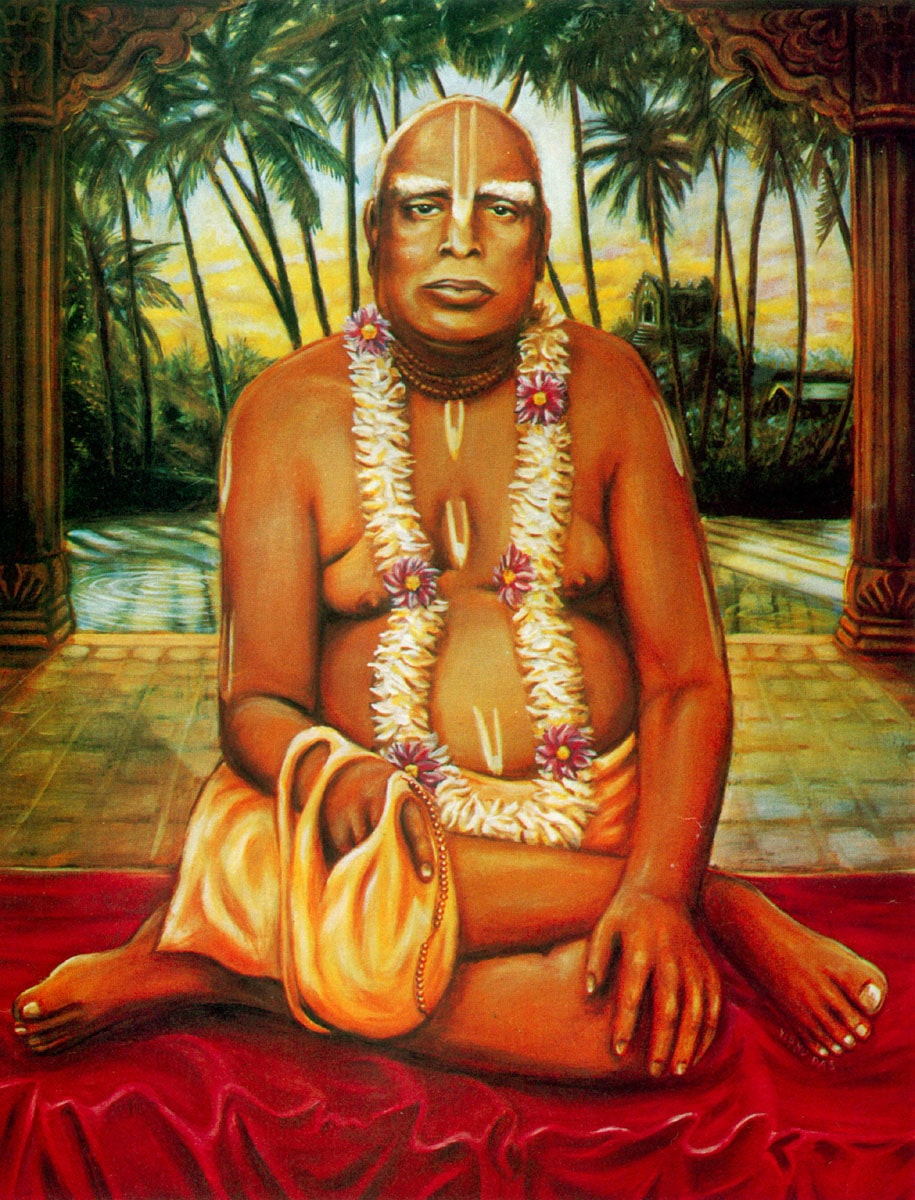 TRANSLATION
I offer my respectful obeisances unto Saccidananda Bhaktivinoda, who is transcendental energy of Lord Chaitanya Mahaprabhu. He is a strict follower of the Goswamis, headed by Srila Rupa Goswami.

Srila Bhaktivinoda Thakura, then known as Kedarnath Datta was born in 1838, in Birnagar (Bengal). He was the third son of Ananda-Candra Datta and Jagat-Mohini Devi. The family lived in fairly wealthy circumstances until Kedarnatha’s father passed away in 1849 when they were reduced to poverty. In 1850, Kedarnatha’s mother arranged a marriage with the daughter of Madhusudana Mitra Mahashaya; a resident of Rana Ghata.

Kedarnatha was taught by his uncle Kashiprasada Ghosh Mahashaya Thakura, at his home in Calcutta. Kashiprasada, having studied under the British education system was a central figure in many literary circles and the editor of the Hindu Intelligencer. Kedarnatha studied his uncle’s books and helped him in submitting articles to the newspaper. He became an expert in English as a reader, speaker, and writer.

When he was 18, he went to college in Calcutta, where he wrote extensively in both English and Bengali (these essays were published locally). He also lectured frequently in both languages. His best friend through these years was Sriman Dvijendranatha Thakura, the eldest son of Maharsi Devendranatha Thakura.

Having seen the corruption in the business world, Kedarnatha decided to become a teacher. He established an English school in Kendrapara, a village near Chutigrama in Orissa, thus pioneering English education in the state. Sometime later he went to Puri and passed a teachers’ examination; he got a teacher’s post in a Cuttack school and later became the headmaster of a school in Bhadrak and then in Madinipura.

His dedicated work was noted by the school-board authorities. As headmaster, Bhaktivinoda studied the various religions and came to the realization that the only real religion established in Bengal, albeit poorly, was that of Sri Chaitanya Mahaprabhu.

Whilst in Puri, Srila Bhaktivinoda Thakura became the manager of the Jagannatha Temple. He established regular worship of the Deity. In the temple courtyard, he established a ‘Bhakti Mandapa’, where daily discourses of Srimad-Bhagavatam were held. Srila Bhaktivinoda Thakura would spend long hours discussing Krishna and chanting the holy name, especially at Tota-Gopinatha Mandir, the tomb of Haridasa Thakura, the Siddha Bakula and the Gambhira.

Bimala Prasad (Bhaktisiddhanta Sarasvati), Bhaktivinoda’s fourth son, was born in Sri Purushottama Kshetra (Jagannatha Puri) on 6th February 1874 AD, answering the prayer of Bhaktivinoda for the Lord ‘to send a Ray of Vishnu’ to preach the message of Sri Chaitanya Mahaprabhu all over the world. He was given the name Bimal Prasad. Sri Srimad Bhaktisiddhanta Sarasvati was to become the spiritual master of A.C. Bhaktivedanta Swami Prabhupada.

As a devotee, Bhaktivinoda showed great humility; he had strict moral standards and would not accept gifts from anyone. Even in his government duties, he refused all honours and titles.In 1881 Bhaktivinoda Thakura began publishing Sajjanatosani, his Vaishnava journal.
Srila Bhaktivinoda Thakura had previously made pilgrimages to Kashi, Prayaga, Mathura and Vrindavana in 1866. At the close of his stay in Naraila he desired to again see the land of Vraja , where he met Srila Jagannatha Dasa Babaji, and accepted him as his eternally worshipable guru.

Between the years 1874 and 1893, Bhaktivinoda Thakura spent much time in seclusion, chanting the holy name (though he still executed his worldly duties); he wrote several books in Sanskrit such as Sri Krishna-samhita, Tattva-sutram and Tattva-viveka and Datta-kausubha.

He spoke Bengali, Sanskrit, English, Latin, Urdu, Persian and Oriya. He managed to obtain and write a Sanskrit commentary on the Chaitanyopanishad.