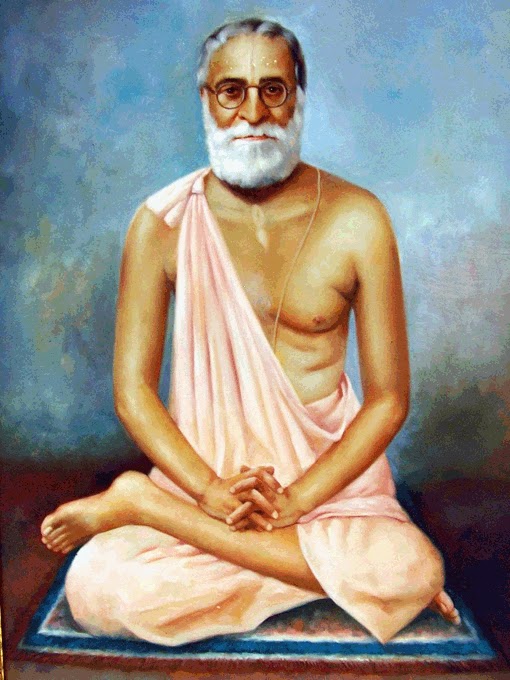 TRANSLATION
I offer my respectful obeisances to Sri Varsabhanavi-Devi-Dayita Dasa [another name of Srila Bhaktisiddhanta Sarasvati], who is favored by Srimati Radharani and who is the ocean of transcendental mercy and the deliverer of the science of Krsna.

​TRANSLATION
I offer my respectful obeisances unto you, the personified energy of Sri Caitanya’s mercy, who deliver devotional service which is enriched with conjugal love of Sri Sri Radha and Krishna, coming exactly in the line of revelation of Srila Rupa Gosvami.

​TRANSLATION
I offer my respectful obeisances unto you, who are the personified teachings of Lord Caitanya. You are the deliverer of the fallen souls. You do not tolerate any statement which is against the teachings of devotional service enunciated by Srila Rupa Gosvami.

Srila Bhaktisiddhanta Sarasvati Thakura Prabhupada was born in 1873 at Jagannatha Puri. His father, Kedar Dutta Bhaktivinoda Thakura, was the magistrate of the city and superintendent of Jagannatha temple.

Once, during the Ratha yatra festival, the car stopped in front of the family’s house. Taking the opportunity, the mother of Srila Bhaktisiddhanta Sarasvati Thakura came out with the baby and put him on the Lotus Feet of Jagannatha. A garland from the hand of Jagannatha fell down on the baby.

Srila Bhaktisiddhanta Sarasvati Thakura was educated in Calcutta and became learned in Mathematics and Astronomy. In his childhood he once took a mango which was meant as an offering for the Deity. When his father rebuked him, saying that he should not have taken the fruit which was meant for the Lord, the child took it very seriously and thought himself a great offender, promising not to take mango again throughout his whole life.

He was acclaimed a great scholar in Calcutta, and the celebrated Dr. Kalidas Nag used to call him ‘a living encyclopedia’. Thakura Bhaktivinoda trained his son in childhood for preaching, and, after taking sannyasa, Srila Bhaktisiddhanta Sarasvati Thakura started the Gaudiya Mission Institution.

He started 64 branches of the Gaudiya Math all over India plus one in London and another in Berlin. Srila Bhaktisiddhanta Sarasvati Thakura was the spiritual master of A.C. Bhaktivedanta Swami Prabhupada, the Founder-Acharya of the International Society for Krishna Consciousness.